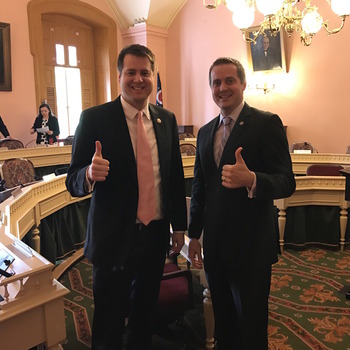 Representative Derek Merrin (R-Monclova Township) worked extensively with OPA throughout the process to develop and refine language that will reduce patient barriers to affordable epinephrine autoinjectors. Rep. Merrin and Rep. Nickie Antonio (D-Lakewood) both spoke in favor of the bill prior to the vote. To view the House discussion and the vote, click here.

Now that HB 101 has passed the House, it now moves to the Senate for consideration. To contact your state senator, please click here.

In summer 2016, local and national media pointed to Mylan's EpiPen as an example of drug pricing gone wrong. As 10TV reporter Kristyn Hartman demonstrated, a complicated drug pricing model that incentivizes higher drug prices points to the need for national movement on pricing transparency and pharmacy benefit manager (PBM) reforms. For more on that, click here, here, and here. The pricing controversy highlighted the need to facilitate easier patient access to epinephrine autoinjectors - both logistically and economically.

Aside from the problems associated with opaque pricing gimmicks, there are other factors that may be contributing to epinephrine autoinjector prices and accessibility, and Rep. Merrin's HB 101 will tackle two specific issues.

Here's why. According to Dr. Scott Gottlieb, former FDA deputy commissioner for policy, "One issue relates to the existing generic drug law, and FDA regulations that govern the generic approval process and the Abbreviated New Drug Application (ANDA) that a generic drug maker must file with FDA. Under the Agency’s interpretation of those rules, if a patient has to be re-trained to use a generic alternative to a branded product, then the alternative product cannot bear the same labeling as the drug it seeks to copy. As a result, it can’t meet the burden of the ANDA process and be approved as a generic equivalent. In other words, the generic drug can’t be considered the 'same' as the branded version that it seeks to copy, and serve as a fully substitutable alternative."

So essentially, because other epinephrine auto-injectors aren't substitutable under current law, if a physician issues a prescription for a branded epinephrine auto-injector, the pharmacist's hands are tied unless they work with the physician to get a new prescription for an alternative. This all unnecessarily wastes the time of the physician, pharmacist, and the patient. HB 101 would allow pharmacists to exercise their clinical judgment to make the necessary product switches, so long as the products are deemed pharmaceutically equivalent.

The second part of HB 101 enables pharmacists to dispense epinephrine auto-injectors to adults 18 years of age or older without a prescription, under a physician’s protocol, once the pharmacist establishes that the patient has already received an initial prescription for epinephrine. So essentially, once a patient gets an initial prescription for epinephrine, as an adult, they would not need to go back to the doctor each year for a new prescription; they could simply get it at the pharmacy without the new physician order. The Ohio Board of Pharmacy, with consultation of the State Medical Board of Ohio, will establish protocol requirements that govern the conditions under which pharmacists can dispense epinephrine auto-injectors to adults without a prescription.

Currently, Ohio pharmacists & pharmacy interns can dispense/administer naloxone and all CDC-recommended vaccines without a prescription, as long as they are acting within a physician protocol. HB 101 would add epinephrine auto-injectors into the same category, thus eliminating the need to visit or contact the doctor for a new prescription every year.

Furthermore, as new laws took effect in 2016 to allow restaurants, swimming pools, colleges, and other public places to stock non-patient specific epinephrine for possible allergic reactions, this bill would eliminate the unnecessary step of these entities seeking out a doctor's prescription before obtaining the product to use in emergency situations, just like they use fire extinguishers today. 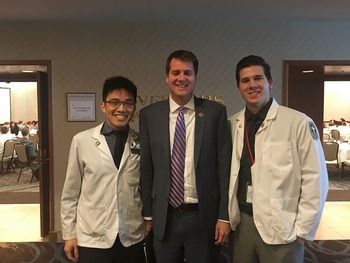 For Ohioans at risk of anaphylactic shock, epinephrine delivered by an autoinjector is a medical necessity and often life-saving. However, the price and unnecessary logistical hassles have become a barrier to access and attainability. The good news is there are multiple epinephrine autoinjectors on the market and more in the pipeline. Under HB 101, consumers will have increased ability to work with pharmacists to secure the best epinephrine auto-injector at a competitive price.

“HB 101 is an attempt to ease the pocketbook pressures of thousands of Ohioans caught in a web of an outdated system that insulates some pharmaceutical manufacturers from necessary market competition,” said Antonio Ciaccia, Director of Government & Public Affairs for the Ohio Pharmacists Association. “It slashes the regulatory red tape that resulted in a broken distribution model, and gives patients and pharmacists better control of their health care.”

Recently, the state of Idaho enacted a law to allow pharmacists to prescribe epinephrine auto-injectors, without any physician oversight or protocol arrangement. For more on that law and the impetus for its passage, click here.

On March 22, OPA members Kelli Barnes (Ohio State University College of Pharmacy and Division of General Internal Medicine) and Suzi Francis (Kroger Pharmacy, Cincinnati Division) delivered testimony to committee members in support of the legislation. They were joined by OPA Director of Government & Public Affairs Antonio Ciaccia to explain the value of the bill and the need to expand the role of the pharmacist.

Barnes and Francis did an excellent job as ambassadors for the profession, and their testimony was very well received.

We would also like to thank Lora Miller with the Ohio Council of Retail Merchants & Affiliates, as well as OPA members Pete Ratycz, Jason Briscoe, and Steve Ferris for submitting written testimony in support of the legislation. Also, a special thanks to Ohio-original Alex Adams, who has helped extensively by providing information on how the Idaho law is working. Lastly, thanks to Rep. Merrin's aide Blake Springhetti for all his hard work behind the scenes.

Please contact your state senators, and ask them for their support of HB 101!

To view the extensive media coverage of the legislation, see the links below:

It could soon be easier for Ohioans to get EpiPen substitutes - WCPO Cincinnati, 5/10/17