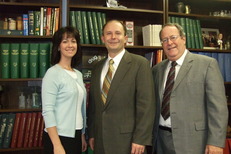 Senator Burke is the only pharmacist in the Ohio legislature and has won high praise from his colleagues as a leader in the area of health care issues.